Problems with gripping, turning, and going over things

Today we discovered a problem with our robot. It was not turning very well at all. The wheels would keep slipping. So we tested it and found out that we needed to put more weight on the wheels. We changed our robot so that it was smaller and the center of gravity was just in front of the wheels.

We worked out the math that showed us what was wrong. The center of gravity was towards the front of the robot, which made the driving wheels have very little weight on them. Here is how you can figure this out for your robot. 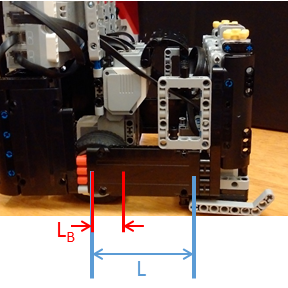 Once you have these two numbers you can use them in the fraction portion of the equation below. 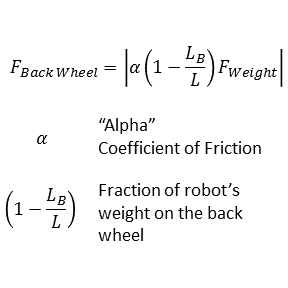 As an example, say your "L" is 10 spaces and the center of gravity is roughly 2 spaces in front of the back wheels (L_b). The ratio for how much of the weight of the robot is on the back wheels is (1-2/10), or 0.8, which is 80%. The higher that percentage, the more grip your robot has. The problem with our last robot design was that we were at 30%. This left 70% on the front wheels, which made it very difficult to turn and to roll over things. We changed our robot design so that now it is at roughly 90% of the weight on the back wheels without an attachment, and 80% to 85% with an attachment on the front.

The second degree of freedom is the weight of the robot. Heavier = more sticky, but also more mass you have to move. So it pretty much equals out.

Third is the distance between the wheels, also called the wheel base. If you make the wheel base longer, without moving the center of gravity, then more weight is on the back. Shorter means less.

If your drive wheels are on the front rather than the back, just flip the diagram around so that you are always measuring from your driving wheels.